To start things off, I have never enjoyed running nor competed in a race (I had ran one two-mile race previously). Partly out of a dare and challenge, I decided to sign up for a half marathon three months away from the race date giving me plenty of time to train and figure out how to ‘be a runner.’ Sure I faltered along the way and was stubborn about certain things, but in the end I was able to actually enjoy running, not just do it because I had to. To celebrate finishing the half marathon and the 200+ miles of training, here are some lessons I learned along the way.

Personally pasta is not one of my favorite meal items so for the first month or so I did not eat pasta or carb-filled foods before my long runs. I thought the cramps were from lack of hydration and just simply being out of shape. Finally one day my roommate made pasta for me the night before a long run – it was magic. 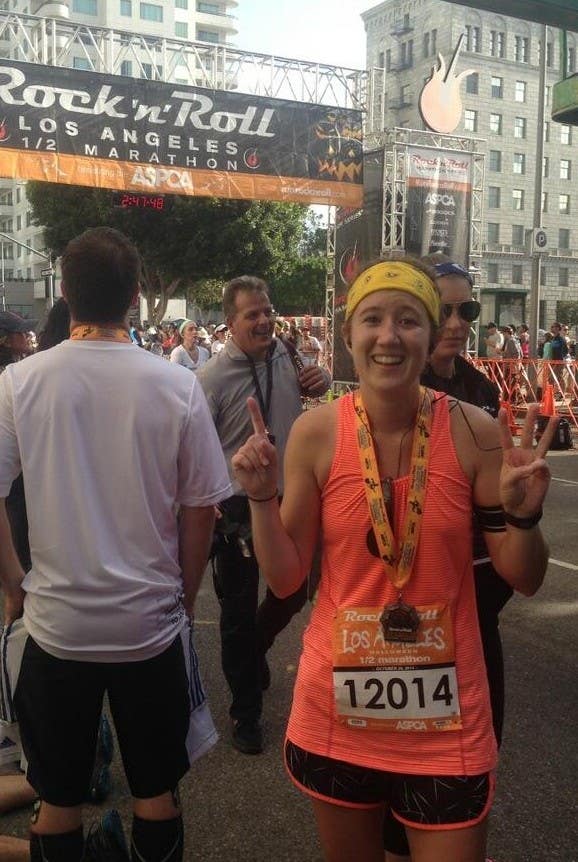 Every Saturday for two months (or so) I hit the pavement around 6 am to ensure I reached my miles well before the heat kicked in. Watching the sun slowly rise made the run tolerable and it helped me get an early start to my weekends.

The farthest I ran during training was 12 miles so I figured, what is an extra mile? Well, an extra mile is a very long way when there is a hill (seemed like a mountain) on the race course. Every route I took while training was flat as can be, so I was a little unprepared for the hill.

Every couple miles on race day I couldn’t wait for those hydration stops, especially the ones with the Gatorade. The first couple stations I took a cup but would only drink a sip or two. Towards the end I was drinking the entire cup in a matter of seconds. At the end of the race I could feel my stomach hating me for drinking all the fluids available. Next time I will be more aware about how much fluids I am drinking on the course.

Once I crossed the finish line it was a breathe of fresh air – I did it, I ran 13.1 miles. The only difference between the actual race and all my other runs was the amount of people running with me and cheering for me. Sure both of those factors helped push myself to run a bit faster but at the core, it was just another run.

-Claire Kooperman works at Injinji and with the help friends, family and the Injinji team (and socks) competed in the Rock n Roll Los Angeles Half Marathon.