Western States 100, Round 12: Meghan Laws Shares Why She Keeps Coming Back

Ultra runner, coach, mom, hobby farmer, musician. These are all words that describe the talented, determined woman known as Meghan Laws. But what is it about the Western States 100 race that brings her back year after year? The 57 year old ultra runner took some time to chat with us recently—telling us about her life in running, how she trains and what makes Western States 100 her favorite race—all while she finished her daily miles. 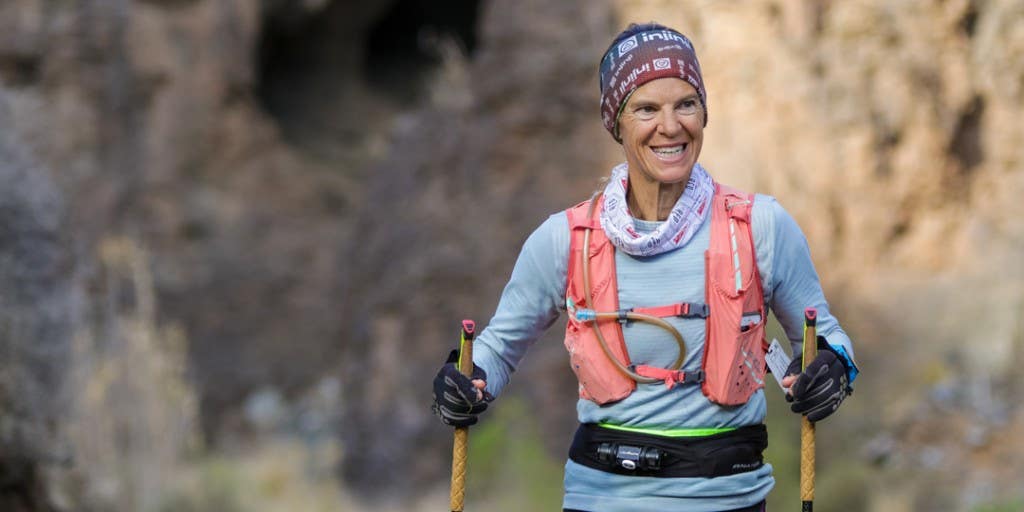 Multi-Talented and Multi-Tasking for the Win

Since Meghan is a little far away from us for an in-person chat (and she’s been crazy busy training for this year’s Western States 100 while coaching other runners), we set up a time for a phone call. Nothing out of the norm with that, right? Well, when Meghan answered the phone, she was actually finishing up a run! While we offered to call another time, she nonchalantly stated that now was as good a time as any, and she’d be happy to talk and jog at the same time. So we talked and she ran, and we were more than a little impressed.

Where It All Began

Meghan started her running career in her 20s, in the early days of running as a sport. She started slow, with a 5k here and a 10k there, not really thinking of herself as a “runner.” But in her 30s, her addiction to the longer race became very real. She ran her first marathon and there was no turning back. After qualifying for marathon trials four times, Meghan found trail running and fell in love, especially with the longer runs. But there was one run she just couldn’t see herself competing in.

“I never thought I would run a 100 miler because I was afraid to run in the dark,” she laughed. “But then I saw the Western States video and it became my dream.”

So she got to work. It was this obsession with running Western States that carried Meghan through her ultra running career. She slowly and steadily added longer distances to her race record, wanting to maintain her focus on being a mom and also keeping herself away from injuries. Her first 50k in 2003 added fuel to the fire, followed by a 50 miler and then a 100k. It took Meghan three years to get up to 100 miles, but in 2006, she entered the Western States 100 through the lottery. Since then, she’s raced the same course 10 more times, heading into her 12th race in just a few days.

Why Western States is Her Race

The Western States 100 is the world’s oldest 100-mile trail run, starting in Squaw Valley, California near where the 1960 Winter Olympics were held, and ending 100.2 miles later in Auburn, California. Throughout the race, runners like Meghan climb 18,000 feet into the high country of Emigrant Pass and descend 23,000 feet through canyons and across rivers. They follow the path of gold-seeking prospectors and homesteading pilgrims as they traverse the ever-changing landscape. And that’s what makes Western States Meghan’s all-time favorite.

“To me it has all the things, it has history, not just running, it has the history of the trail the miners used, in the valleys and canyons, and before that the Native Americans. Plus, it’s such a beautiful change in terrain from start to finish,” she explained.

Beyond the beautiful views, Meghan talked about the community of runners that makes Western States feel like home. The shared love of the trail, and of the race itself, brings an incredible energy that buoys participants, volunteers and fans into what seems almost like a celebration of a love for the outdoors and of testing the limits of the body and mind.

Meghan doesn’t just compete in Western States, she lives the lifestyle. She and her husband have a hobby farm nearby the course, so she has the ability to train on sections she’ll be running in just a few days.

When you talk to Meghan about her training, she makes it sound simple: she just goes out and makes sure she’s hitting her big runs about twice a week, gradually increasing her mileage up until the race. She has her favorite gear on, like Injinji toesocks, whenever she runs, and she does what works for her. Meghan’s cross-training routine is a little out of the ordinary: while she’s tried yoga and other traditional classes, she prefers farm chores to keep her body moving in different planes than her runs.

But what makes Meghan such a competitor in Western States? Her mental strength. Over the years, she’s not only built up her body to withstand the grueling miles (it only takes a few days of doing nothing for her to feel refreshed and recovered after the big race!), she’s stuck to her innate ability to just keep going.

“I think it’s just my personality, honestly,” said Meghan. “I always finish what I start.”

While she’s definitely reached the title of Western States veteran, this seasoned runner still gets a few pre-race jitters. Meghan told us she’s a little nervous about the high country miles, since they aren’t her strong suit, but that she’s as ready as she’s going to be.

For the Love of the Race

Running for 100 miles undoubtedly takes physical and mental strength. But for the long-time runners, there’s another drive even more important that keeps them going—it’s a passion for the sport itself.

We could hear the smile in Meghan’s voice as she told us why she loves running ultra races, like Western States, so much. “I just love how alive it makes me feel,” she said. “I love how 100% I live in my body and am present in the moment.”

And this presence in life seems to trickle into whatever Meghan sets her mind to. When she’s not running, you can find her spending time with her husband on their farm, hiking the nearby trails, or even playing music. She’s been playing the flute for some time, now as a part of a community band, and she recently picked up the oboe.

Meghan’s holistic outlook on life is both impressive and inspiring, and it has served her well throughout her ultra running career. And we can’t wait to see how she does at this year’s race—we’re guessing it’s going to be good.