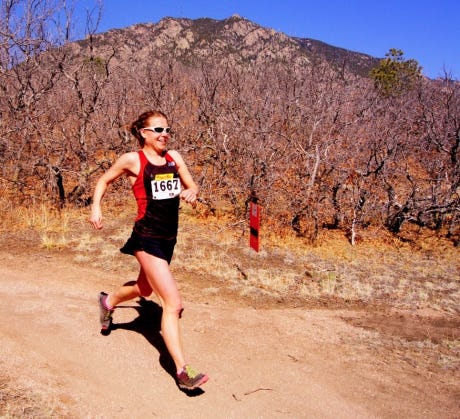 Can change everything…. when referring to a positive pregnancy test! I’ve always had an irregular menstrual cycle and for a majority of my running career thus far, it has been a blessing as sometimes I would go nine months without a period. When I took the test back in February, my emotions went from shock to denial to disbelief to acceptance to joy and finally elation!

However, at the same time, as an elite mountain/trail/road runner/snow shoe racer, there is a part of me that feels despite this blessing I’ve been cursed! Pregnancy= weight gain, slower running, less racing, limited caffeine (coffee currently tastes metallic to me), no beer (not even the best micro brew), no wine, etc. etc. I can’t even change my cats’ litter boxes (this could be a blessing) except for the heightened sense of smell I have acquired which isn’t so great if Matt (husband) has forgotten to change them!

Is there ever a right time to start a family? Matt and I have been married 11 years in July. Deep down I think we both knew we wanted to have kids someday. However, we also had a lot of life we wanted to live, goals we wanted to accomplish, places to travel and bills to pay down. So, we got Emma (cat), Gizmo (cat), Ches-E (black lab awesome running buddy), Fischer (yellow lab also great running buddy), Chopper (cat) & K2 (cat). Six pets later, Matt finally told me no more no matter how cute they are or what sob story they come to the shelter with.

Back in 2007-2008 when I was primarily a road runner, my goal was to make the Olympic Marathon Trials. If I’d qualified, I would have been 30 at the trials. After the trials would I thought would be the perfect time to start a family. Well hot humid weather and gale force winds debunked my plans and I didn’t qualify. However, I had a ton of fitness left so I decided to enter the Mt. Washington Road Race June 2008. Little did I know, this was going to be a break through moment for me in my career and not making the trials was the biggest blessing in disguise I could have ever imagined. I ended up winning which made me the U.S. Mountain Running National Champion, qualified me for my first ever U.S. Mountain Running Team and at the time was the 4th fastest recorded time by a woman on Mt. Washington.

Fast forward five years and I’ve been blessed to represent the U.S. for five consecutive years at the World Mountain Running Championships, earned sponsorships (thanks Injinji, New Balance, Power Bar & Atlas) and literally traveled the world and made lifelong friends. I’ve truly been living the dream of a 7th grade girl running for the International Falls Broncos. I’ve accomplished more than I ever dreamed possible. Yet, I still have bigger goals and haven’t fulfilled the potential I feel I am capable of all of this while working full time.

I had my 35th birthday last August and you could say the biological clock began to tick. I have a background in special education and know the longer you wait to have children the risk for birth defects increases. So, we decided after the World Mountain Running Championships and my sister’s wedding in September, we’d just let nature take its course. I signed up for a few fall races and my first ultra-marathon in December at the North Face 50 and continued to train but with less structure and intensity. By December, I wasn’t pregnant which I kind of expected with my irregular menstrual cycle.

So with the start of the New Year, I went in for my annual check-up and talked to the ob/gyn about the possibility of starting a family. With my age, history of irregular cycle, competitive running, etc. the doctor basically told me I was geriatric and recommended me to a specialist. I didn’t feel a lot of confidence in the prospect of starting a family when I left his office.

Other people always had “reasons” or suggestions as to why my menstrual cycle was irregular—too much running, low body fat, not enough protein because I’m a vegetarian, etc. However, deep down I didn’t really believe any of these reasons. I have a muscular build but I am not your scrawny runner type and those who know me, know I eat well. Chocolate is a daily staple in my diet and I don’t go more than a few days without baking something! In addition, I have yearly blood tests done and have never been anemic except when I was in college and had mono. (That was before I was a vegetarian!) My period wasn’t even regular when I was in high school and probably weighed at least 10-15 lbs more than I do now.

In mountain running, the world championships alternate between uphill only courses in even years and up/down courses in odd years. I love all types of mountain running but definitely have more natural ability on the uphill. So, if we were going to start a family, an up/down year seemed like the better option. (Not that one should plan starting a family around running!) So, I figured my appointment with the specialist was a great time to express the urgency I felt with my age and the calendar about starting a family if it were indeed possible.

Turns out I have polycystic ovaries and don’t ovulate on my own. However, with the help of Letzerole, apparently I can! I have strong faith and through this entire process, I have prayed God’s will be done. I ended up getting pregnant the first round in February.

Thankfully, I’m still able to train and race just at a lower intensity. I haven’t had any morning sickness and I don’t even know that I’m more tired than usual as I’m still working two jobs, training, commuting, etc.

Pregnancy feels like it could be the greatest ultra-marathon of my life. I hoping to have a natural birth and preparing with both physical and mental preparation as I would a race. I’ve always been an animal lover and love puppies/kitties. I have never really been a “baby person”. I am excited and scared about motherhood. Can I take care of a child? Will I love it as much as I love my pets? Will I have an easy or hard delivery? Breastfeeding, what?! Will I lose all my baby weight? Can I be faster than I was before? How will I balance it all? Many questions and fears, but I trust God’s plan. In life, it tends to be the things we don’t do rather than those we do we later regret.

Here is a great read for woman who want to know the science behind why it is ok and actually beneficial to both mom and baby to exercise and even compete while pregnant:

Exercising Through Your Pregnancy