Does Listening to Music Help or Hurt My Running? 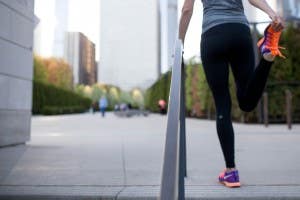 The mental fortitude that accompanies running is sometimes stronger than the physical. Coming up with ways to elevate workouts and keep them interesting is a constant battle for runners, that’s why many rely on music to get them through the miles.

Portable mp3 players like iPods and now smartphones have made taking music along on a run easier than ever. For many, having that extra boost that music provides makes the difference between an enjoyable run or one that seems to drag on. Still, some amateur and professional runners choose to forgo any music on their runs, citing a variety of reasons that boil down to decreased performance or safety as a result of listening to music.

So which is the right way? Listening to music for motivation, or tuning into the natural surroundings instead? The answer is not cut and dry and really comes down to an individual runner’s reasons for participating in the activity. If you are trying to decide if music will help or hurt your running routine, take a look at a few of the ways it could potentially do both.

The Benefits of Running With Music

Studies have found that athletes who listen to music during workouts perform at a higher physical level than without it. The tempo of the music makes a difference, though. A 2009 study from Liverpool John Moores University found that people riding bikes had a higher physical output when the tempo of music was manipulated to be faster, and that the performance dropped nearly 9% when the music was slowed down. So if you decide to tap this benefit of listening to music while running, be sure the tempo is fast enough to keep your feet moving.

There’s a reason the book, “Loneliness of the Long Distance Runner” strikes such a chord with runners. Sometimes running can get a little boring. Even if you are busy pushing your physical limits or taking in the scenery, there will come a point when the workout seems dry. Music can add that additional element that keeps you entertained and motivated enough to complete your run with intensity. In some studies, music has even been shown to mask pain associated with exercise by stimulating the brain in other ways.

Music has been proven to increase the speed at which the brain processes information and functions. When running and listening to music, thoughts can fire off at rapid speeds and there is not a lot of interruption in that process. Listening to music while running can actually make some people more focused on their thoughts than running without the tunes.

Both exercise and music have been shown to reduce stress levels so putting them together can be the ultimate anxiety-reducer. This is especially beneficial for casual runners who just want to get out and be active but aren’t necessarily worried about improving time or performance. The combination of music and exercise can lead to runners feel much more relaxed when they return from their workouts than if they had run without tunes.

The Downside to Running With Music

Many road races expressly ask runners NOT to wear music devices from purely a safety standpoint. When you have music blaring in your ears, it makes you less aware of your surroundings and can lead to accidents and injury. Even in the best cases, runners listening to music can be a distraction to other runners. In the worst cases, someone can end up getting hurt. For runners who do their workouts outside, it’s especially important to balance the safety hazards against the other benefits of listening to music.

This is on both the pro and con lists because it can be a good or bad thing, depending on how you look at it. While listening to music can certainly be an entertaining distraction, it can also misdirect resources that could be used to improve physical performance and endurance. Breathing, for example, is one area that can suffer when runners are too into their tunes and not focused enough on their lungs. Focus on abdominal breathing allows the lungs to draw in more oxygen, thus improving the stamina of the runner. Paying attention to running form is another area where music can cut in and cause a runner to perform more poorly than they would if they had focused on their physical exertion.

Both amateur and elite runners who run without music often say they do it because they want to be fully immersed in the running experience. When you run with music on, you essentially tune out the rest of the world around you, and that can lead to some missed opportunities to see, hear, and experience real-life. A workout is also a time that many choose to clear their heads and enjoy a break from the electronically produced sounds of life. Putting in ear buds cancels out those benefits and makes it more difficult to just enjoy some peace and quiet.

When music becomes part of your mental running routine, it can lead to issues if it’s taken away. If there is a race that forbids listening to music and you’ve done all your training with ear buds in then you may have trouble making it to the finish line. If music distracts you from pain or boredom or is the only reason you believe you can run a certain speed or distance, then that could backfire on you at some point. Retraining your brain and legs to run without music can be difficult so some runners just decide to forgo it altogether so there is never an issue.

So what’s the bottom line? Decide why you personally would want to listen to music when running and weigh that against the potential pitfalls, like impaired safety. Whether you run with or without music, just getting out there and being active is all that really matters–how you choose to accomplish it is not as important.