If you're not an avid runner (or maybe even if you are), race distances can be a little confusing. There are races measured in miles, kilometers, even some measured in vague terms like "ultra races." So what do they all mean? 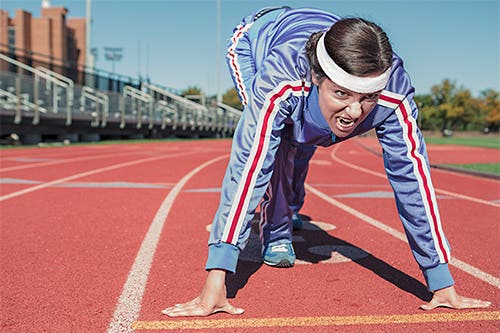 Otherwise known as 3.1 miles. Or that race you hear about at every holiday, during every season, and perhaps have run while wearing a superhero costume. This race takes little to no training to complete, which makes it a hit with just about everyone—and perfect for anything from raising support for a notable cause to drinking beers with your friends.

The 10K breaks down to 6.2 miles (that's twice as long as a 5K, see? #math). Not a short race, but not too long either. It's the kind of race that requires a bit of speed and a bit of endurance, which can be tricky for runners who fall exclusively in either the speed or distance categories of running. But with a little training, this race can be both fun and challenging.

13.1 miles, this race is a gateway into the more grueling end of competitive racing. Requiring significant training, the half marathon is no joke. After running this race, you not only get a medal and the satisfaction of telling people you actually ran 13.1 miles in a row, you will likely come away with some great stories. When you're running for 13.1 miles (not to mention the training runs to get to the race day), there's nothing better to distract you than people watching. While there may not be as many people dressed up as in the fun 5K, you might just be lucky enough to see someone running by in a banana costume.

The full marathon is the kind of race that makes most people cringe when you tell them you're running it. 26.2 miles?! Why, oh why would a person want to run that many miles, right? Well there are a lot of reasons, actually. For one, it's a great accomplishment as a runner. It tests you physically, mentally, and often emotionally—there's nothing like 26.2 miles to really show you what you're made of.

Ultra races aren't for the faint of heart. If 26.2 miles sounds daunting, how about a little more? Technically an ultra marathon is anything longer than 26.2 miles, but the distances of these races vary greatly. They could be 30 miles to 100 miles or even more. Some races are on trails, some are on paved routes, and some of them have a bit of each. Ultra running has been described as one of the most grueling experiences out there, but also one of the most rewarding (or addicting, depending on who you ask).

So these are some of the most common races run—but by no means is this an exhaustive list. There are different types of races out there for pretty much everyone, no matter your age, experience level, and your running goals. All you have to do is lace up your shoes and get out there!