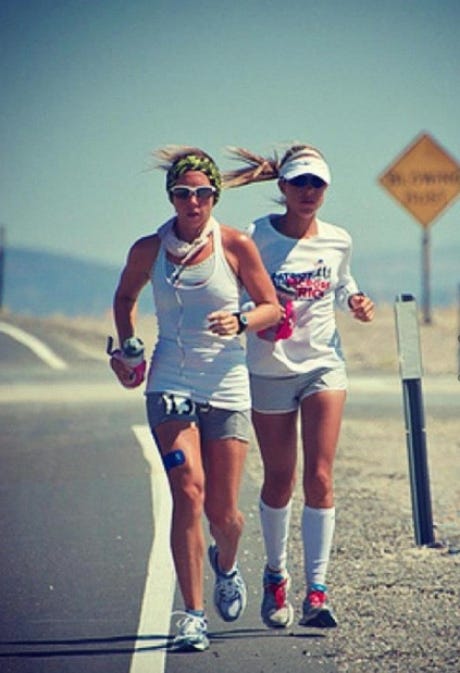 Summer racing season has been off to a solid start for our Team Injinji athletes, with big wins at the San Diego 100 this month and Western States and Badwater just over the horizon. Our own Alexa Dickerson is heading into her second year racing Badwater and is training with running coach and Team Injinji teammate Lisa Smith Batchen. We sat down with them to get the scoop on training for the esteemed race.

Injinji: With the epic Badwater race coming up, how do you feel? What makes this race any different from any other races you have run this year?

Alexa Dickerson (AD): I am really excited about the upcoming race. I'm normally not huge into team sports, but the camaraderie of this race just makes it so special. There aren't very many races where you get to experience every step of the way with your crew (normally you see them only every few miles, if that). However, with that said, I still am a bit nervous. I feel like Badwater is a bit more of a stressful race than others since its so big and also I have 5-6 people on my crew missing time off from work or with their families to just come and crew me, so I wouldn't want to let anyone down. In other races, if something happens and I end up having a bad day to drop then I only let myself down. This race isn't just about me. 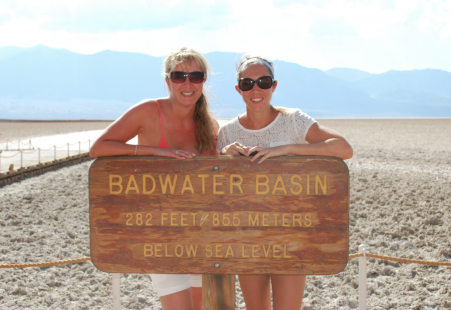 Alexa (right) and her mother, her crew chief at last year's race.[/caption]

Injinji: Do you have any PR goals or overall goals for this race?

AD: Last year my primary goal was to finish and then to try and break 40 hours, which I did and finished in 38hours, 53 minutes. Now that I have ran the race and have a better idea on what I can do to improve, I am hoping to go under 36 hours.

Injinji: Who or what do you see as your biggest competition?

AD: It seems like there are a lot of really strong women running in this years race, however I try not to get too caught up in other people's races. I feel I can do much better and run way smarter when I focus on myself and my race. So my biggest competition will be beating myself from last year.

Injinji: How do you train for a race like Badwater? How is it different from training for other races?

AD: Badwater is definitely different training wise than other ultras or 100s that I have done. First of all its on the road, so my training switches from trail running to mostly road running, except for a couple ultras I do to get in long training runs (but thats only because it's hard to find ultra races on the road around here). I also will do some heat training, which I never have really done for any other races. A lot of Badwater runners seem to do a lot of sessions in the sauna where they do some light exercises while they're in there or maybe hot yoga, but I think the best way to get acclimated to the heat is to run in the heat. So, I try and get my training runs in mid day when its warmer and my boyfriend, Mark, and I will also go down to Palm Springs or Cabo to run where temperatures can reach well over 100 degrees as well. In addition, I do a lot of strength work and Crossfit a few months before my running mileage gets too high. I think that for a race like Badwater you not only need to have endurance, but have a lot of strength as well in order for your body to carry you 135 miles through three mountain ranges.

Injinji: What has been the most difficult part about training for this race?

AD: I would say one of the hardest parts training for the race is the logistics of being able to stay hydrated enough during the long, hot training runs. Like I said, Mark and I will go down to Palm Springs (and Mexico once) to do heat runs, where we are running for hours in 100+ degrees, however if both of us are running and training for the race, then we can't crew for one another. Therefore, we end up having to lug a huge hydration pack full of water, in addition to handhelds, which just gets annoying, or we will place jugs of water about every 2-3 miles before the run, but by the time we get to them the water is hot. He doesn't mind so much, but I hate it and prefer my water ice cold. The only good thing about all that though, is once I was actually racing and had my crew refilling my water bottle every mile or so and giving me fresh ice bandanas, the heat was way more manageable to deal with. 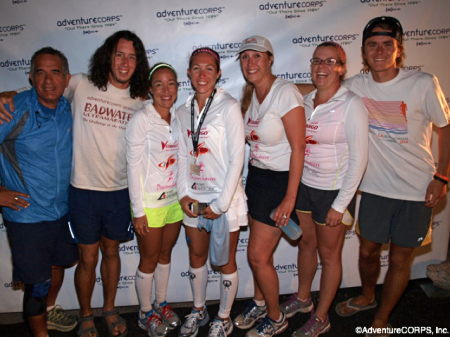 Injinji: What Injinji socks are you planning on wearing? What other gear is crucial for your run?

AD: I really love the new 2.0 Run socks and the new compression socks. My calves tend to get really tight and cause issues with the back of my knee, but I have found when I wear compression, I don't have any issues with that, so I will be switching in and out of those two socks along the way. Other products that are crucial to the race for me are my Hoka Bondi B running shoes. Last year I wore those along with Injinjis and I finished with just a few tiny blisters, which was pretty amazing for that race. Some other runners had horrendous blisters, I couldn't even imagine having to deal with. In addition, I use a carbohydrate product called, Vitargo, which Dave Mackey, fellow Injinji athlete is a big supporter of, as my main source of calories. By using Vitargo, I'm able to take in a lot more calories without having any stomach issues, which is hard to do with any other product in the heat we go through.

Injinji: How do you plan on staying hydrated in the desert? Do you have any meal preferences the week of the race?

AD: Basically, you have to just have to be constantly drinking water and staying on top of your electrolytes. I think last year I drank a water bottle every 1-2 miles and then every 3-4 miles I would drink a bottle of Vitargo. Salt tabs were every 30 minutes. The week of the race, I try and eat as healthy as I can. No junk and nothing with gluten, which tends to flare up any pre existing injuries I have. Last year I was even super picky of what I ate while staying at the hotel in Death Valley. I don't think the food there is probably the healthiest so I would make myself something with the food I brought or fuel up on Vitargo to get in extra carbohydrate. However, after the race, I eat whatever I'm craving.

Injinji: Is it any different being a woman competing in this race? Do you have any words of advice for up and coming female ultra-runners?

AD: There are definitely way less women in the race then men. This year there are 73 males and 23 females, but I think that this is one of the few sporting events where the women are way more competitive with the men and I think that they're actually tougher. For example, Pam Reed outright won the race twice and I read in an interview with the race director, Chris Kostman, that if there are any drops in the race, it almost always is a guy. It would definitely be really cool to see more female runners in this race, especially younger ones. Last year, there was Claire Dieterich, Hannah Roberts and myself, all under 25 years old, which I thought was pretty awesome to have younger women in such a tough event. It is a pretty fulfilling experience to be able to run Badwater, or any ultra really, and as a female very empowering to be able to keep up with or surpass a lot of the men and so I would hope that more women get into the sport.

Injinji: How do you connect with the Dreamchasers charity?

AD: Last year, Dreamchasers was my Badwater charity. Dreamchasers was founded by my coach, Lisa Smith-Batchen and the money goes to help towards women and children in countries in Africa and South America. Last year we helped to raise over $7000 to go towards missions in Brazil. This year Dreamchasers is raising money for Lisa's project, Badwater for Good Water, which will help to get clean drinking water to missions in Ethiopia and India. If anyone is interested in donating, please visithttp://www.badwater4goodwater.com/donate

Injinji: What/Who would you say your runspiration is?

AD: I have a few runspirations. I admire different people for different reasons, but am a huge fan of strong women. Definitely Lisa, because she has done so much with the sport, not only by doing well in so many different races, but also by giving back to the sport with her charity, by coaching athletes and also putting on races of her own. I also really admire, Sabrina Little, who is one of the best runners that there are in the 24 hour event. I've never met her but I read her blog and I think she is hilarious and very witty and on top of that a badass runner. She definitely has inspired me to do a 24 hour event, which I am planning on doing this fall. Although she isn't a runner, but an elite Crossfitter, I love Jenny Labaw. She broke her foot right before the Crossfit Open this year and still managed to compete while wearing a boot! So she definitely gave me hope that I could still find ways of training for Badwater even though I had foot surgery. Finally, my mom totally inspires me. She started running a few years ago after I had gotten into ultras and had a hard time getting into it at first, but now she has run 5 marathons and paced me at Badwater as well as two other 100s as well. I kind of sucker her into crewing/pacing, but she always is my biggest motivator so I need her there with me.

Injinji: What are you most nervous or excited about for the run?

AD: I am more excited. I had so much fun last year and can't wait to do it all over again, with hopefully a better finishing time :)

Injinji: What is the most difficult part about the Badwater run?

Lisa Smith Batchen (LSB) The most difficult parts of BW is dealing with the elements. The extreme heat, the sun beating on you for several hours each day, sleep deprivation. BW like most ultra-races needs to be approached as if anything can happen but the one thing you do know is it is going to be HOT and this is difficult!

Injinji: What specific advice have you given Alexa to help her push through difficult parts?

LSB: Alexa is experienced doing BW last year and knows what she is getting into now☺ I have Alexa training for the course, and working on ways that she can deal with the heat and elements better. This comes from managing your pace, having a great crew to help take care of you and staying confident when the going gets tough. I am so proud of Alexa and all she has accomplished.